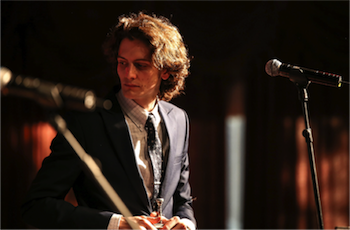 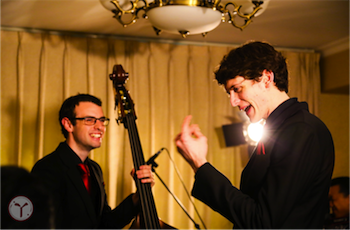 Graceful melodies. Bringing you the taste of ages past. Deep, seductive vocals. The strappingly sensual sounds of the double bass. The trumpet, liberating and relaxing, coupled with wild bursts heralding in a new realm of discovery. The piano leads you to drink in the elegance of a melodious dream.

Take up your glass and drink with Jue Hui – your comely chaperons – as they lead you away from the hustle and bustle of this post-future life and into the subtle timelessness of a midsummer night’s dream. How? Jue Hui – the meeting place of jazz – satisfaction at last.

Australia’s own, Matthew is a highly achieved trumpeter and vocalist. He has appeared on CCTV Shenzhen （深圳电视台）, CCTV Anhui（安徽电视台）, and recently performed for an audience of over 800 million viewers on the CCTV New Year’s Gala 2014（中央电视台春节联欢晚会）.

Hailing from France, Pierre is Northern China’s first call pianist. He has appeared at all major Chinese cities and music festivals (Nine Gates Beijing JZ Shanghai) during his 8 years in China. Pierre has also been featured on numerous Chinese films and has appeared alongside the likes of Andy Lau（刘德华）and Gong Li（巩俐）.

Since arriving in China at Spring Festival 2013, Daniel has established himself as one of the most in demand jazz double bassists in Beijing. Originally from Ireland, he has been working as a professional musician for the last six years and has worked with various different groups and established artists including Isotope, Nigel Money, Phil Ware and The Alex Mathias Quartet. Daniel’s style is one of creative sensitivity and passion.

At the age of 25, Alex’s performance history reads like the New York Times traval section. He has performed at the Wembley Arena London, the Walt Disney Concert Hall, the Beijing MasterCard Center, Dizzy’s Club Coca Cola in New York, Le Trianon Concert Hall in Paris, the Taipei Arena, the Workers’ Arena in Beijing and the Stadium Meerdeka in Kuala Lumpur. His recent projects have seen Alex collaborate with Asian musical icons, Jolin Tsai（蔡依林）, Han Geng（韩庚）, Laure Shang（尚雯婕）, Wei Li An（韦礼安） and Cui Jian（崔健）. In 2013, he was the official drummer for “Voice of China”.