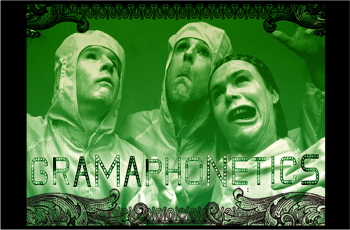 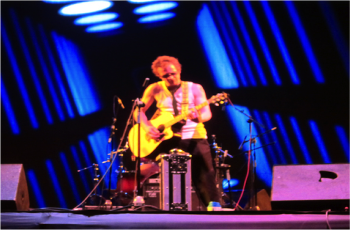 Take three old friends—Marty B, Bodo Ze, and Easy Lee, all Germans—and plop them, one by one, into Chengdu. Let simmer, and see what comes out. The result? After many years and multiple band formations (one with the dubious name of Eatable Freakballs and another, the ill-fated Funky Something) and various occupations, Gramaphonetics emerged. China’s first 100% foreign electro band, with its roots in the blues and its history tangled in various countries, personalities, and musical styles. “Our bondage [sic] goes further than this band. Bodo and Marty are a team since the days when Bodo´s dad picked Marty up by the collar and continuously banged his head against the ceiling to shut him up” says Lee.

Lee: Basically the band originated from me and Martin scratching on old gramophone records and collecting records from the trash and letting them run on different speeds. We didn’t have microphones; we rapped into old headphones and recorded this on tapes. I arrived in [Chengdu in] June, and we worked on our program for many weeks very intensely, and then we realized, no, this is not good enough; we need to do more. And we worked harder and harder, and the months flew by, and I think that it’s about time. It’s Bodo, Marty B, and Easy Lee, electronic dance music, various genres mixed together, live music, it’s good, it’s tasty, it’s fresh, and we’re finally ready.

Marty: The gramophone is the origin of recording and sharing music.

– How would you describe the other two members of your band?

Bodo: Martin and Lee are very creative. They always get the best melody out of me when they produce me, or they arrange something I wouldn’t think of. If there are bad things it’s because of tense situations, people get grumpy. But that’s normal in a band, especially if you stick together every day. Marty: Lee has really good ears, and when I mix something in the beginning he’s organizing it in five minutes and this is something I can learn from.

Lee: Bodo and Marty are both hard-working, disciplined, conscious people. Both of them have been in several bands before; they know what they are doing. Bodo developed himself autistically over the last five years to become China’s best bass player, so his quality is calming our creative ideas down to make them more pleasant to the public. Marty is responsible for a lot of the freaky elements. I’m egotistical, narcissistic, selfish. I’m an only child, I’m very hard to work with, I have big mood swings, and I wouldn’t get close to me the first two hours after I wake up. The third hour it’s acceptable to be in my presence, but don’t talk to me. I’m not disciplined. But when I do do something, it’s pretty damn good.

Bodo: He’s got a great voice.

– What’s different between Gramaphonetics and your previous projects?

Bodo: The difference is, for me, now with Gramaphonetics we are doing what we want—we don’t try to stay in pop structures.

Marty: We shared common influences over 15 years; that’s why [our music] maybe has this mash-up feeling. We have all this programmed on samplers and electronic production. We’re not writing songs with a drummer and equipment and rehearsing. We basically start working by exchanging projects and arrangements and beats. And then afterward we make it ready to perform. It’s really comfortable, these transportable samplers.

Bodo: A drummer would be nice, but first of all you have to find a drummer who’s willing to practice every time with you. Second of all, he has to play tight with the BPM. It’s very difficult for a drummer to play with a metronome. Bodo: That’s why we all decided to make the beats ourselves, then at least they’re there forever …

Lee: We can just unplug it … and sometimes it’s really hard to get a taxi. With a drummer you need two.

How would you define success or failure for musicians?

Marty: To have the possibility go on developing, what you want to do, [and not] have to cut down on time, expenses or anything.

Bodo: A long time ago [I was playing] in Germany with Martin and a drummer in a stupid cocktail bar. And there were 10 people [in the audience]. But they were smiling, and dancing and everything. It’s already enough. The problem is you can’t make a living from that, and then the music suffers. In China, you work 30 hours a month or 15, and you have enough money. If I have a concert every week until I’m 70, and I have money, then I’m happy.

Lee: Of course it’s important to get [something back] for the work that you do, but at the end the success is measured by you: If you know what you have done is really you, what you really wanted to do. And above all of that, you are doing it together and you feel like a an indestructible team.

Bodo: The best example of successful musicians is maybe the Buena Vista Social Club from Cuba. They were never famous until they became 90, and they never gave up their passion for music and then they became world-famous, and after their death people will still listen to their albums.

In order to be creative and progressive musicians, what sacrifices do you have to make?

Bodo: Women. They want to feel petted, which is in their nature and you cannot blame them for it. Maybe because we like to create and this is our life this often leads to a conflict. It’s like freedom against slavery. It is difficult, the woman wants to be with you every day, but you cannot, because you cannot focus then. It’s always about how radically you commit yourself. Lee: You can make money by making music, you can make money otherwise. And you sacrifice your needs and wants down to a level that gives you enough time and space to do what you really want, to create the things that really mean something to you and really come from you.

What differences are there between performing in China and in Western countries?

Bodo: Appreciation. The young Chinese like it, but when it comes to applause, which is one kind of appreciation … . Let’s say there is a band in Germany that is a good underground band. You will have applause for 20 seconds; in China it’s three seconds. Five. The second thing is China’s history of music is very young; they jumped from military music and went straight into pop. So sometimes they want to appreciate, but don’t know how. They don’t understand the style, or how to dance to it, how to feel the hook from the chorus. I’m not very optimistic in China. I had Chinese friends telling me foreigners cannot get famous. Maybe if it’s one foreigner in the band playing with other Chinese or if you speak perfect Chinese and run a talk show like Da Shan. I don’t think it’s very easy.

Bodo: We want to become rock stars because our society our system teaches us to be one. Because you have MTV, and you see those guys there, how they destroy hotel rooms and fuck all the bitches. Then you think, “Wow! That’s cool, I want the same.” But is that really the honey? What kind of value in life is that? People should go back to real values in life. Like being strong, honest, being able to run a marathon. Being able to make nice music and create nice art. Not like career, getting rich, doing this and that, and at the end when they turn 70 and get cancer, they regret their lives. I just hope that I will be able to live from my music. It means I have a couple of Euros to buy food and once a year to fly somewhere and see another country. You should do what you want when make music. Then you become authentic. Of course I say this now, and if we play 10 songs, and somebody’s like, “Let’s make a big deal,” I wouldn’t say no, I guess.