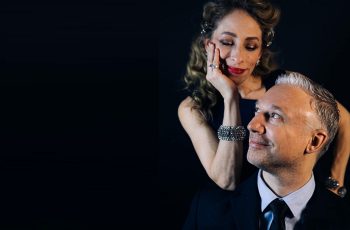 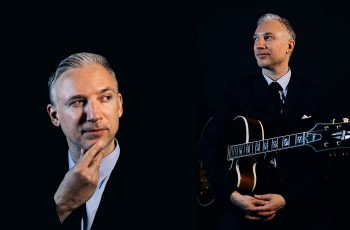 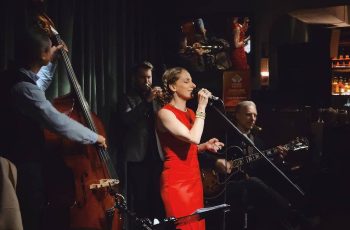 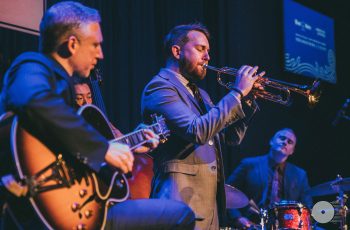 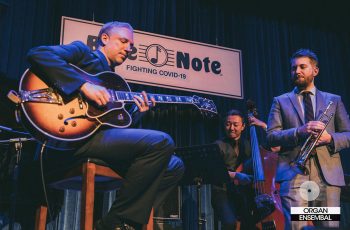 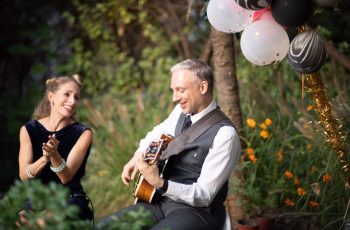 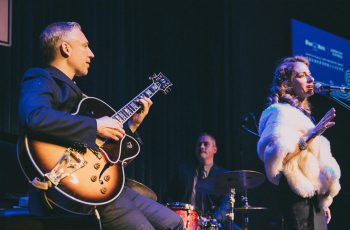 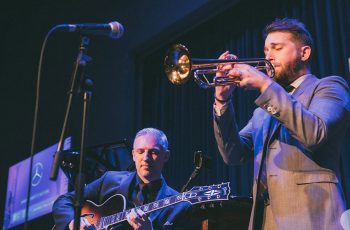 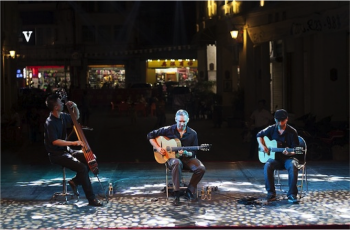 “Martin plays with fire, precision, and creativity and is part of the new breed of guitarists that are carrying on the Django tradition with such fervor…recommended!”

“They sound very good, they have that gypsy soul . .  . It’s nice to hear a good guitarist.”

Founded by guitarist Martin, the DM+ is a truly multi-national trio based in Beijing. Besides the guitar, DM+ can include any instruments such as keyboard, drum, trumpet, double bass. The musicians of this flexible trio come from all over the globe, adding their eclectic mix of international flavors to the live music idiom. With such a diverse array of musical backgrounds and cultures, the DM+ offers a truly unique sound whether it’s hard swinging jazz, Italian folk, hot latin rhythms, fiery gypsy waltzes or elegant ballads.

Since 2012 Martin has been performing and teaching music in Beijing. He holds a teaching certification from China Music Conservatory, which allows him to teach private lessons and workshops all over China. Additional workshops in China include lectures on jazz at music conservatories such as Beijing Midi Music School and Beijing Modern Music Conservatory. On occasion Martin acts as a judge for music students at jazz competitions.

Pierre is one of the most requested musicians established in China. He has played thousands of shows all over the country at the greatest venues since more than a decade after relocating from France, including many for some of the top Chinese pop stars and movie directors.

He is a highly versatile and creative artist, cultivating a mainstream jazz piano style balancing elegant lyrism and virtuosic energy with a great sense of swing. He is also specialized in playing Rhodes electric piano and analog synthesizers, very open-minded on other genre like Funk and electronica. His main influences to name a few are Kenny Barron, Bill Evans, Herbie Hancock, Chick Corea, Keith Jarrett.

Nico is a French drummer, educator and music producer who has been involved in numerous musical projects since the 90’s. After being very active on the French music scene since an early age, his art and passion made him travel the world and explore.

In 2009, he finally settled down in Beijing, after discovering the city while touring with his French soul-jazz trio Blue Mantra then as a sideman of Hazel Payne, 1978 Grammy Award winner. Since then, he has become one of the most demanded drummers in China and has shown his rare musical taste and versatility in all kinds of projects, from the Beijing jazz, folk, rock and experimental scene to China’s most popular music acts, movies and TV shows. Having played over 3500 concerts worldwide, he is also a highly sought-after recording artist and produces tracks for the gaming and movie industry.

Alex has performed at the Wembley Arena in London, the Walt Disney Concert Hall, the Chinese National Center for the Performing Arts, the Beijing MasterCard Center, Dizzy’s Club Coca Cola at Jazz at Lincoln Center in New York City, Le Trianon Concert Hall in Paris, the Taipei Arena, the Worker’s Arena in Beijing, the Guangzhou International Sports Arena, Stadium Merdeka in Kuala Lumpur, as well as many other venues throughout Asia, the Caribbean, Europe, Australia, and the United States.

He has collaborated with the Asian artists Jolin Cai, Han Geng,Wei Li An, and Cui Jian, as well as having led his own projects in the United States and China. Alex is a graduate of the Oberlin Conservatory of Music where he was awarded the Conservatory Initiative Grant Supporting Imagination and Excellence and the Conservatory Dean’s Scholarship for his studies of Jazz and American classical music.

Guang Jun, a great talent bass player who lives in Beijing. He studied traditional Chinese music with his father when he was a boy and started studying double bass in 1999. He graduated from MIDI Music College, then studied Jazz with many famous musicians such as Hongwei Kong (Golden Buddha), Yong Huang, Ling Zhang, and Yue Liu.

After performing on stage for the first time when he was 17, he has cooperated with many world well known Jazz musicians and won the audience applause at many music festivals and corporate events.

Noah was born in Portland, Oregon to a musical family. Early on, he knew playing music was his life’s purpose. He attended Temple University in Philadelphia where he studied trumpet under the great Terrell Stafford. After graduating with a Masters degree he moved to New York City. He currently tours the world with several jazz groups, such as the Gordon Webster Band, Michael Gamble and the Rhythm Serenaders, Jonathan Stout, and the Hot Sardines.

In 2017, He was awarded “Best Soloist” award by a panel of Grammy-winning artists at the World Jam event in Madrid, Spain. Noah has a deep respect for the jazz tradition, and embraces all types of jazz music. His first album, entitled “Common Thread,” is comprised of all original music. “Common Thread” seeks to reflect stories and emotions of our lives through music, as well as common things that all human beings share. He released an album of original Swing music that he composed and arranged, called “Head to Head.”

Kyle was born in Indianapolis, Indiana, and grew up in Bloomington. He currently lives between Verona, Italy and Beijing, China, teaching and performing Jazz all over the world. He studied music performance and education at Berklee College of Music, Indiana University, and the University of Northern Colorado, completing his doctorate in 1995. In 1991 he received the prestigious Fulbright Grant for a year of pedagogical research in Hungary, exploring new methods of teaching improvisation.

He has performed with numerous internationally-known jazz and commercial artists, including Paul Motian, Vincent Herring, the Mingus Dynasty Big Band, The Temptations, and Liza Minelli. He has recorded over 50 albums with various artists and independent labels, including his original compositions Be Still and Know, World Downside Up and Tongues of Fire, collaborating with European jazz masters Paolo Birro, Salvatore Maiore, and Roberto Dani.

Anyone who’s anyone in Beijing knows the name and voice of Jess. One of China’s best jazz vocalists, Jess has spent 20 years gracing stages, festivals and music venues all over China with her amazing voice. She moves between her jazz quartet, her singer-songwriter project and her electronic band, “Chinatown.”

A songwriting graduate of the world-famous Berklee College of Music, Jess has honed her craft and was recently featured in her mentor, Pat Pattison’s “Songwriting without Boundaries”. Her original music was featured in the 2010 Andy Lao hysterical remake of “What Women Want”. Jess’s vocal and writing talents have also appeared nationwide in China for commercials for GM, Audi, Samsung, BMW and many other high-end brands. In 2014, in the final climactic scene of Cui Jian’s movie release, “Blue Sky Bones”, you can hear Jess’s voice in character. Jess has fantastic control over her voice; she can easily sing different nuances and characters. A woman of many talents, she has starred as the heroine lead role in a short film “Tube Girl”. Many well-known Chinese TV and radio shows have requested her as a special guest; and if you want to find out more, there is even a documentary of her life in China which aired on national TV (CCTV4) in Sept 2014.

Music is her soul food. Susan has become a jazz lover ever since the age of 12 when she saw a video of Esperanza Spalding performing in 2008. She is deeply influenced by jazz legends like Chet Baker, Ella Fitzgerald, Anita O’Day, Jacob Collier, Herbie Hancock etc. Also, she is keen on Soul, Funk, and different kinds of music.

She learns keyboard and guitar herself and has been practicing singing for years. Her voice is exquisite and unique. She is active in Beijing Jazz stage and has gained over 100,000 followers in a Chinese Karaoke APP Changba. Since 2018, as a jazz singer, she has participated in Beijing Mars Music Festival at Tango Live house, Galleria Instreet summer outdoor party, Beijing Ritz-Carlton Hotel, ATTA restaurant opening ceremony and other events. Her life experience and values highly agree with what jazz is, that is to pursue freedom up to the hilt yet within certain proper rules, to enjoy the pleasure of having creativity that only humans own.

Simona is an award-winning singer, composer, educator. Having released four albums as a leader and appearing on numerous compilations, she has established herself in the NY jazz scene and continues touring internationally.

Simona began her musical journey in Napoli, Italy. Before focusing exclusively on singing during her teens, she studied classical piano. At 16 she was referred to the president of Napoli’s CFM School, where she studied classical voice training under the guide of Cristina Florio. Not long after embarking on her jazz studies, Simona was already active on the local jazz scene joining little groups and big bands. After earning her Bachelors Degree, Simona explored the Italian music scene and took a solo trip to New York. There she earned a Masters Degree in Jazz Performance from the Queens College in 2014. During these years, she performed extensively with her group, and joined various rhythm sections in different American and European cities. She learns keyboard and guitar herself and has been practicing singing for years. Her voice is exquisite and unique.

She participated in several jazz competitions, winning first prize in “Big Band Competition for jazz vocalist” in Rome at Casa del Jazz and won the prestigious scholarship “Dennis Irwin”, while earning finalist honors in the International Jazz Competition Voicingers 2011 (Poland). Since 2018 Simona has been living in Beijing while touring around the world. After countless shows at concert halls in many a city, she gained over 100,000 followers in a Chinese Karaoke APP Changba.