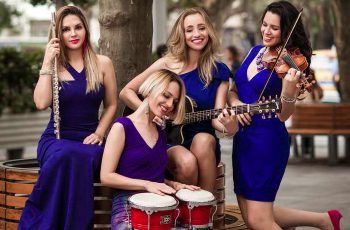 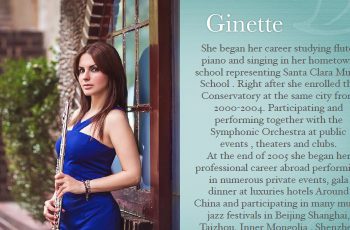 The members of the band – Ivet (violin, vocal, percussion), Roksana Smirnova (piano), Michael (guitar, vocal), Ginette (flute, vocal, percussion) – have been playing together in various forms for 2 years, all band members have been performing in festivals around China, five star hotels, various shopping malls, big stages and restaurants… CHIC BOSSA is made by players graduated from classic and jazz schools, making your events professional and dynamic. All members have been around China for many years developing also a nice intercultural musical repertoire.

Classical Violin trained since the age of 7. Graduated from ENA National Arts School in Havana in 1999. Ivet also have been part of different orchestras and bands playing different style of music with international artists. She has been In China since 2001 performing in cities like Beijing, Shanghai, Chengdu, Guangzhou etc. Ivet was part of the band for the opening of Expo 2010 with international artists as Andrea Bocelli. At the moment performing with Fantasy string quartet and a Duet with pianist Roksana Smirnova.

Pianist and composer was born in Odessa, Ukraine. She took her first piano lessons at the age of six. When she was 13 she made her performance debut in International Utiosov Jazz Festival. Roxanne studied jazz piano at the School of Art and Culture in Odessa (1997-2001). Then she studied classical piano at the Music Academy in Odessa. (2001-2006). In spring of 2008 the band with Roxanne wins 2nd price on international contest of young jazz bands. Roxanne herself wins “Special price for best pianist”. In 2010 she won the grant from J.F. Kennedy Center (Washington, USA) for big educational music program in witch took part just 8 people from all over the world. Roxanne cooperate with many bands and musicians such as Magnus Lindgren and his “Batucada Jazz”, with singer Anna Cristoferson (Sweden) etc.

Singer, guitar player and songwriter, Michele Wankenne was born in Brazil and has traveled the whole world to perform and expand your musical culture. Singing jazz, bossa nova and pop songs in english, portuguese, spanish, french, italian and some chinese with the same delicate voice and charming style. Has study guitar and voice in Brazil in the Tom Jobim Center and The Voice School. Recorded the last album Vivo para Isso with her own songs in iTunes since last year and the album Simples Assim with international songs and bossa nova.

She began her career studying flute, piano and singing in her hometown school representing Santa Clara Music School. Right after she enrolled the Conservatory at the same city from 2000-2004. Participating and performing together with the Symphonic Orchestra at public events, theaters and clubs. At the end of 2005 she began her professional career abroad performing in numerous private events, gala dinner at luxuries hotels Around China and participating in many music jazz festivals in Beijing Shanghai, Taizhou, Inner Mongolia , Shenzhen and many others.